Why motor insurers use age when pricing cover

There are a large number of different rating factors used in setting the price for motor insurance. These include factors associated with the vehicle, where it is kept and the people who drive it. For the latter, age can materially influence both the likelihood of policyholders making a claim and the cost of such claims when they occur.

Impact of age on motor insurance claims and premiums

Chart One shows the percentage of customers claiming per policy, the average cost of a claim and the average premium for different age groups for private motor insurance in 2017 for people aged 18-20, 21-25 and so on in five year bands until age 90. All policies for people aged 91 and over have been grouped together. 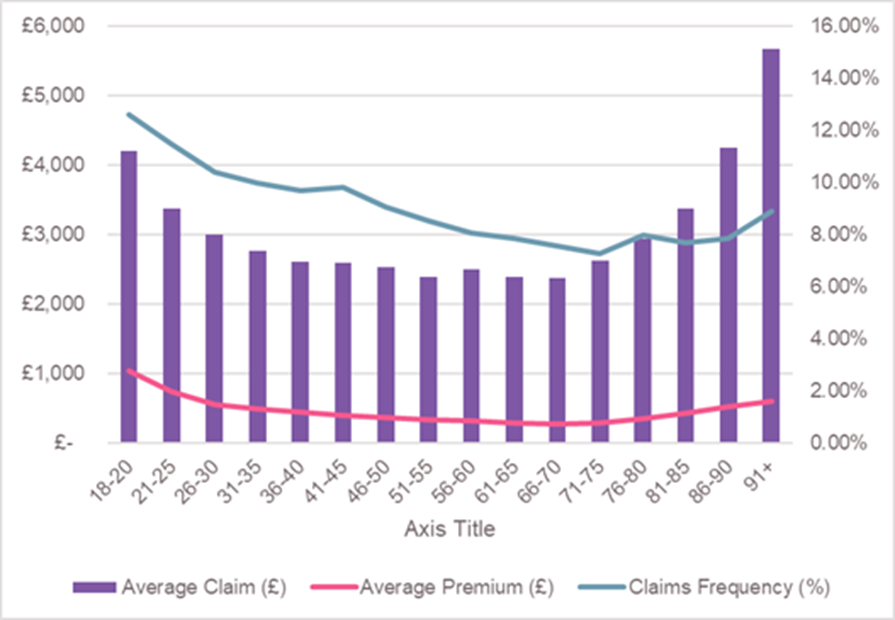 For all age bands, there is a clear relationship between premiums paid and the cost and frequency of claims. This pushes premiums up for younger and older drivers. For drivers between the ages of 31 and 70, who experience claims frequencies as low as 7%, and claims as low as £2,360, premiums fall significantly.

Of this group, drivers aged between 66 and 70 are the best off, paying just £275 for their car insurance, which is only around a quarter of the average price paid by 18-20 year olds. These drivers have the least costly claims on average, while maintaining a fairly low claims frequency.

In contrast, drivers over 91 have an average claim of over £5,600, almost double that of drivers 20 years younger. On the other end of the scale, drivers aged 18-20 are the most likely to claim, with 1 in 8 making a claim on their policy.